Hope for the Homeless

By JCCAugust 14, 2021Newsletter
No Comments

In the spirit of disclosure, I admit that for much of my life I looked at the homeless with skepticism. What changed that is my four-year experience with Rogue Retreat, a non-profit Jackson County organization dedicated to providing hope for the homeless.  Addiction and mental illness go hand in hand with many of our homeless and there is a group of people who will choose to remain homeless regardless of the assistance they might receive, but there are many others who are simply victims of circumstances that they had no control over. As we at Rogue Retreat, like to say, the main problem with the homeless is that they are homeless.

My first experience with Rogue Retreat came by being involved with Hope Village, a group of tiny (and I mean tiny) houses in Medford to provide temporary shelter. After some awkward first steps and some misunderstanding with the Medford City Council, Rogue Retreat was able to create a small, safe and friendly village where residents could actually lock their doors. Theft among the homeless is rampant. They also had access to toilets and showers, a communal kitchen where each had his/her own repurposed refrigerator and, as important as anything, a mailbox. You can’t get a job unless you have a mailing address. 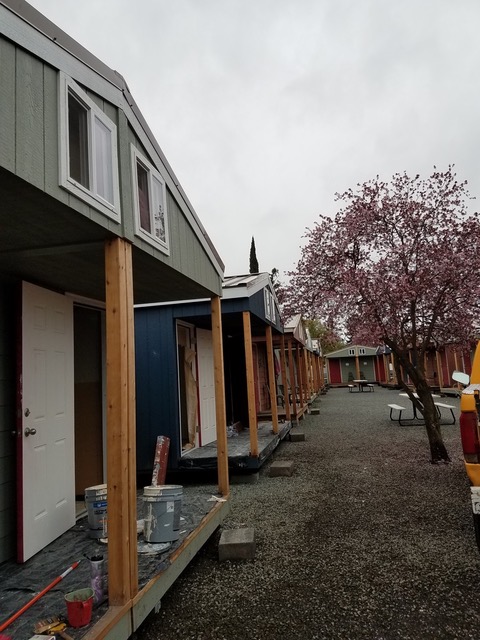 On a whim, a group of our friends combined our resources to fund one of the tiny houses and then some of us installed insulation and wallboard and did interior painting. In the process, for the first time in my life, I started interacting with homeless people and started learning their stories. Reading a card that said, “Thanks for making me feel human again” was impactful.   I guess you might say that I was hooked, and this led me to join the Rogue Retreat Board of Directors where my level of understanding and appreciation for all that Rogue Retreat does soared. Rogue Retreat’s motto is “A hand up, not a hand out.” To achieve this they refer to their “secret sauce” which is simply taking a homeless person where he or she is and providing them, through a case-management program, a network of services to get them back on their feet with a goal of transitioning to permanent housing and financial security.  It is not easy, but they are having success. Rogue Retreat is daily transforming lost lives into productive lives.

Hope Village is just one piece of the Rogue Retreat network of services. Others include the urban campground off Biddle which started with 40 tent sites, but, at the urging of the City of Medford, is now expanding to 150 sites. The Kelly Shelter, a 24-hour facility, can house up to 60 people and is always full. Grant money provided for the purchase of the Redwood Inn in Medford. It is being remodeled into 47 kitchen suites mainly for victims of last year’s devastating wildland fires. Nightly, Rogue Retreat provides a safe harbor for over 300 people, taking care of approximately one-third of the valley’s homeless. Rogue Retreat is not the answer, but it is part of the solution.  For more details about Rogue Retreat, visit the website at rogueretreat.org